“To power an inclusive
future for all”

Cisco Live 2020’s keynote yesterday (June 16) followed the same theme as many of the other leading tech vendor events and focussed primarily on the current social and economic climate brought about by the global Covid-19 pandemic, before moving onto new Cisco Webex and Cisco SecureX features – which were the core focus of announcements on day one.

“Possibilities” was the main theme of the keynote where Chuck Robbins summarised the current climate and demand that technology reimagine applications, secure data, transform traditional network and data centre infrastructure, and the “empowering” of teams through technology as being more important now than ever. Which namely allowed Cisco to re-introduce and emphasise some of the new core features coming to their Webex and SecureX platforms.

Outside of this, most of the keynote didn’t focus on new announcements, but openly discussed the chaos that #Covid19 has thrown on the world nicely introducing the keynotes’ main theme – simple “Possibilities”.

“2020 has been a difficult and challenging year… We started out with a new decade with hope, and we never imagined that in June we would have experienced what we’ve experienced this year.” Chuck Robbins, Cisco Live 2020

Chuck Robbins went on to talk about the combination of the Covid-19 pandemic, the fundamental change to business and employees and how we work – combined with the urgency, rapid change in direction and crazy tasks that every organisation has been faced. And also ensuring the technology, people and business can function from home, which has of course been a challenge for many organisations globally.

“One of those big challenges included shifting office workers to a remote work style. This stark change, on top of all of the exterior issues, has taken a toll–both on the enterprise and individuals.” Chuck Robbins, Cisco Live 2020.

Additions to Webex and SecureX

Javed Khan, VP of collaboration at Cisco, was next on the virtual stage joined by Gee Rittenhouse, senior VP at Cisco, to discuss some of the new features being added to their Webex and SecureX platforms:

With so many people working from home for the foreseeable future due to #COVID19, video and web conferencing use has skyrocketed across all major platforms, namely Zoom, Microsoft Teams and of course Webex.

By April 2020, Cisco said they were seeing more than 25 billion meeting minutes a month, which is three times the size of the normal monthly average and said that “We have the unique opportunity to use our collaboration technology and our amazing people to help power an inclusive future for all.”

We already know the future of Webex (currently in preview) will bring an enhanced experience leveraging what Cisco have called “Cognitive Collaboration” which will deliver insights about upcoming meetings, contacts as well as information about your day to reduce the need to keep flicking between Webex and Outlook. 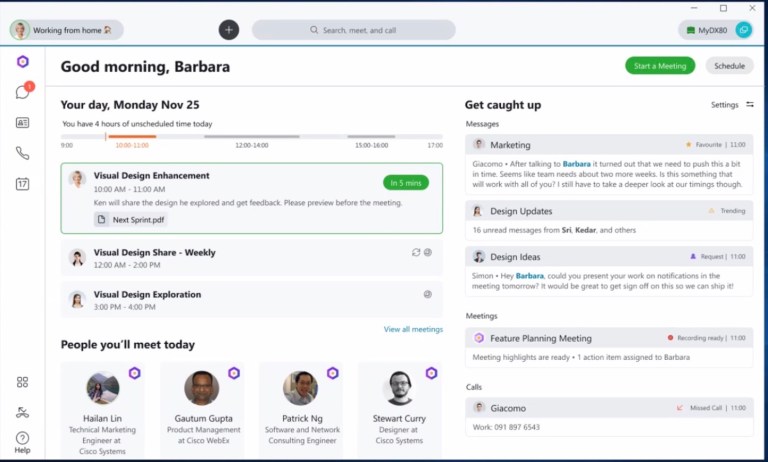 Next, Javed Khan formerly announced the addition of the Webex Assistant, a personal digital assistant that can be used within the Webex platform to enable handsfree operation and event in meeting administration Webex meetings. With the Webex Assistant, users can “ask” Webex to record the meeting, take notes, and even send highlights to attendees when the meeting has finished. 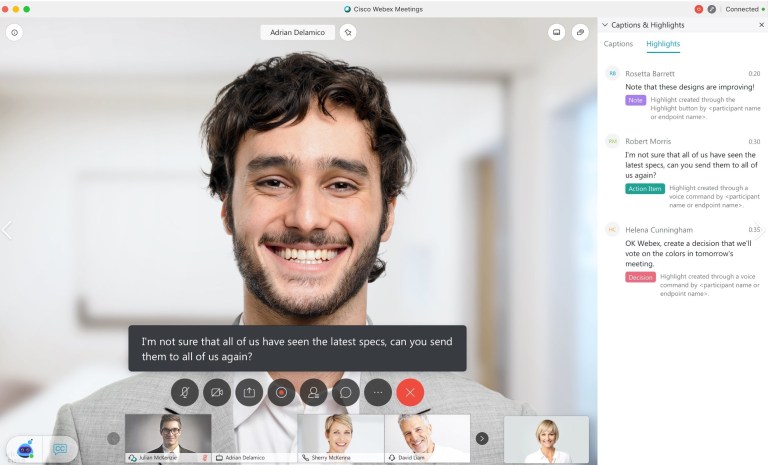 Security built in was another focus of Webex improvement, with extended data loss prevention (DLP) retention, Legal Hold tools for chat and content which is also coming to Webex Meetings. Cisco also announced an expansion to their end-to-end encryption including AES 256 Bit encryption with GCM mode for increased protection for meeting data and resistance against tampering. Security around meetings has of course been very top of mind for many whereby Zoom have had their reputation dented over claims and fears of poor security across their platform.

Cisco also announced the Webex Desk Pro – an “AI powered” collaboration device that features a 27-inch 4K display, 71-degree HD camera and digital whiteboarding which looks like a cross between a Surface Studio and a Cisco EX device.

Doubling down on AI

Cisco said that they would be “doubling down on AI” and that they would be adding even more intelligence into their contact centre solutions, converting customer support agents into “super agents” to ensure that they always have all the all the right information at their fingertips to allow them to solving customer issues faster than ever.  Javed Khan said that the goal of Cisco Contact Centre platform is to “improved customer satisfaction and improved customer loyalty.”

It’s also very apparent that Cisco are going to be dropping the “Webex Teams” name and moving to “Webex App” or simply back to just “Webex” as part of their next update integrations. I think this is a good move as to be honest, customers got confused when Webex Teams simply got Teams, which, let’s face it, every assumed they meant Microsoft Teams!

From a security perspective, another huge focus for Cisco, Gee Rittenhouse talked about some of the new optimised features within SecureX, which he called “the most comprehensive cloud native platform in the industry.”

Gee Rittenhouse continued his explanation of the SecureX platform, stating that “In one place, you can see your entire environment, threats and incidents, and resolve policy changes.”

This was followed by a quick demo in which Cisco illustrated how Cisco SecureX customers could directly see all the possible security threats across their network through a single view/dashboard.  The demo showed a “kill chain” explorer view whereby, upon clicking on a particular detected threat, the system generated a relationship graph so that the SecOp team can see everything related to that single threat along the ability to then block it across the organisation with a just couple of clicks. There is also some automation behind this allowing some auto remediation as you’d expect.

Cisco said they have a huge and growing number of integration partners, and are sharing intelligence and threat protection details with other leading security vendors including Microsoft, McAfee, and many others.

Summary and Our live review event

As you’d expect from Cisco – huge focus on collaboration and security which right now is top of mind as many organisations get ready for a quite different future for the time-being at least.

What did you think? Did you attend the conference? What were your key takeaways and what did I miss – watch our Cisco Live review event featuring Rob Price, Technology Lead, Cisco UK&I Partner Organisation.

Ready to start a conversation? Fill in the form below and we’ll get you in touch with our experts: