Having just celebrated the beginning of a New Year, in most cases it signals an opportunity to adjust or make a change. This might take the form of a New Year’s Resolution, like for example, going to the gym twice a week, giving up those tempting snacks, learning a new language, deploying SD-WAN.

‘What?’ I hear you say. Well, you wouldn’t be the first one who wants digitally transform your business by deploying a 21st century technology in your organisation’s IT infrastructure, and if Gartner’s December 2015 SD-WAN forecast is anything to go by, you won’t be the last. But if you haven’t embarked on such a project yet, now is a good time to turn your attention to it.
“Sure, but migrating to a more agile, hybrid model, with zero-touch provisioning and business intent policies is not exactly in the same league as deciding to have a work-out every Tuesday and Thursday.”

Perhaps not, but that doesn’t mean it should be any more daunting a task. At the high level there are four steps; audit, design, deploy, and review.

There is no doubt that embracing SD-WAN is going to involve many areas of the business including the networks (LAN and WAN) and equipment like switches, routers, firewalls, access points, etc. Then there are the applications, the servers they run on and the locations they are resident in. Let’s also not forget the users themselves, the endpoint devices they employ to interact with applications and where they are connecting from. Oh, and let’s not forget the IT teams that manage these elements.

Just like any digital transformation, it needs sensible planning and preparation. That means starting at the very beginning to get a clear picture of what is being used, how it’s being used and who, or what, is using it.

I also cannot stress enough how vital it is to know the IT world your business lives in and know it before you start making changes. Having this panoramic view at the outset means that you are in the ideal place to see the dependences and inter-dependences, of users and applications, and all that exists between them, at which point, you can decide how to move forward.
It also means that you have baselines and benchmarks to refer back to once you have embarked on the project as well as a “before and after” comparison once it’s complete.

What are the best practices?

In my opinion, deploying SD-WAN can be done in a phased approach if you wish but in an ideal work you need and will want to apply the 80:20 rule. By that I mean pick the SD-WAN technology that allows you to design and configure everything from wireless access point all the way through to data centre, incorporating network devices, network paths, user access, application traffic management and more, before you even deploy your first SD-WAN device.

Riverbed SteelConnect allows you to have your entire SD-WAN infrastructure laid out in front you via a single centralised management interface, which means that you can build the policies that are relevant to the business in advance of physical installation.

But when you do start to deploy, if he has room on his sleigh and your branch office has a suitable chimney, even Santa could deliver to site for you. OK, he’s a busy man, so perhaps you might use some other shipping method. But equipment doesn’t need to be delivered to a remote location accompanied by IT expertise. Simply plug in, switch on and everything is orchestrated and provisioned automatically from your SDWAN controller.

As you work your way through the transformation, SDWAN becomes your single source of truth, which helps to ensure you keep the business picture in focus.

No-one ever said New Year’s resolutions aren’t a challenge, but that doesn’t mean they should be difficult, and if your business is healthier, more active and agile than last year, then that’s a good thing.

Join Cisilion’s SD-WAN event on 2nd Feb to find out everything you need to know. Fill in the form below. 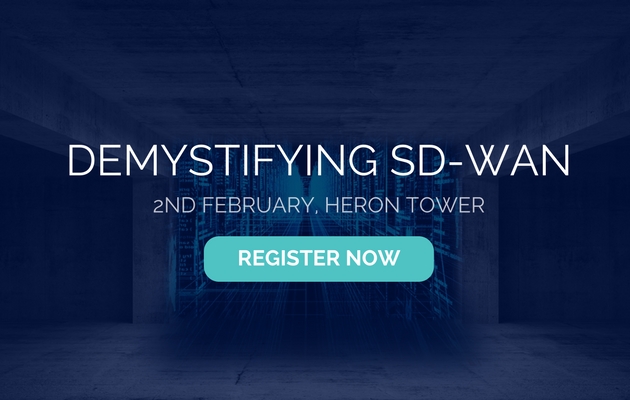 Come experience the future of networking and how to modernise costly and complex legacy WANs that weren’t designed for hybrid, cloud-centric architectures.